The latest sculptural cycle Kiklop, represented at Mirt`s solo exhibition in the HKDM Gallery, undoubtedly belongs to the most complex and most intimidating content of the entire opus. It is a direct reaction to the current problem of the threat of both European and world peace, linking on one side on the popular antique mythological theme (eg, metamorphosis), but on the other hand, it is preceded by the domestic Croatian literature, in more precisely the same name in the novel by Ranko Marinković in 1965, after which a film was filmed, which in a horrifyingly grotesque manner describes the decadent atmosphere in Zagreb 's bourgeois - Bohemian circles just before the outbreak of II. World War. Mirt is in the plastic depictions of the one-cannibal mythological monster, Poseidon's son Polyphemus, which, according to Homer's quotations, was blinded by Odysseus alone, he also appeared in Ovid's Metamorphoses, besides his favorite material, iron wire as reinforcement, also the remains of asphalt panels of Maribor roads and pavements. Asphalt is made from granulates and bitumen, which, after a complicated industrial process, is eliminated from petroleum, material, proven to cause the greatest amount of pollution, and at the same time the greatest social injustice on the earth, Mirt used it as a symbol of the Polymers and the general human shield, the upper part the trunk depicted as an asphalt torso, without a head and a hand, as if it were an archaeological find of some ancient sculpture. It is therefore a multipurpose-based project linking Mirt and Redon, Homer and Marinkovic, antiquity and contemporaneity, war and peace, abuse and salvation, painting and sculpture, iron and asphalt, Zagreb and Maribor etc., where the artist deliberately went into anti-esthetic the austerity of "new" new brutalism, linking simultaneously to architecturally modern.
Mario Berdič 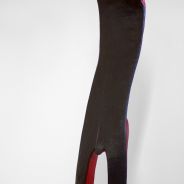 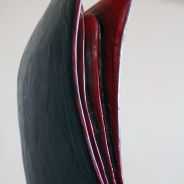 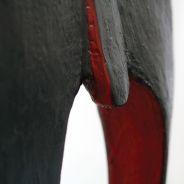 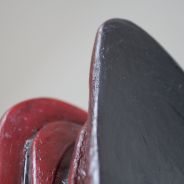 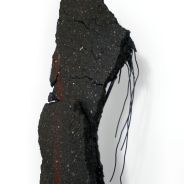